What is Laser Therapy?

Laser therapy is a specific form of light-based therapeutic intervention that utilizes controlled applications of low-intensity, coherent and monochromatic light (i.e., LASER) in humans and animals to produce clinically-beneficial outcomes.

“A form of light therapy that utilizes non-ionizing light sources, including lasers, LEDs, and broadband light, in the visible and infrared spectrum. It is a nonthermal process involving endogenous chromophores eliciting photophysical (i.e., linear and nonlinear) and photochemical events at various biological scales. This process results in beneficial therapeutic outcomes including but not limited to the alleviation of pain or inflammation, immunomodulation, and promotion of wound healing and tissue regeneration.”

Laser therapy is a painless, non-invasive and very safe treatment that uses controlled amounts of laser light to modulate natural biological processes to produce beneficial clinical effects, such as:

Laser Therapy is not a thermal modality; in most applications, local tissue temperature will not rise more than 1-2°C. At its primary level, laser therapy depends upon the actual interaction between light and tissue, such as the absorption of photons by photoreceptive molecules (chromophores) at a sub-cellular level. These primary interactions create photochemical and photophysical reactions that lead to a cascade of biological processes.

By controlling for photon energy (wavelength), and the rate (power), quantity (time) and distribution (intensity) of that energy as it is delivered to the tissue, we can influence various photochemical and photophysical processes and the biological activities they support, and thereby tailor the resulting higher-level effects to produce desired clinical outcomes.

How does SpectraVET Laser Therapy Work?

The effects of all light and laser therapies are primarily photochemical; not thermal - at least, not on a macro-scale – and result from a chain of mechanisms initiated by photon absorption:

Primary: Absorption of photons by photo-receptive molecules (chromophores such as e.g. cytochromes, porphyrins, etc.) and the transduction of photon energy to induce chemical changes (i.e., photochemistry)

Tertiary: The products of secondary mechanisms then produce effects such as gene transcription, inter-cellular signaling, and vasodilation; and, 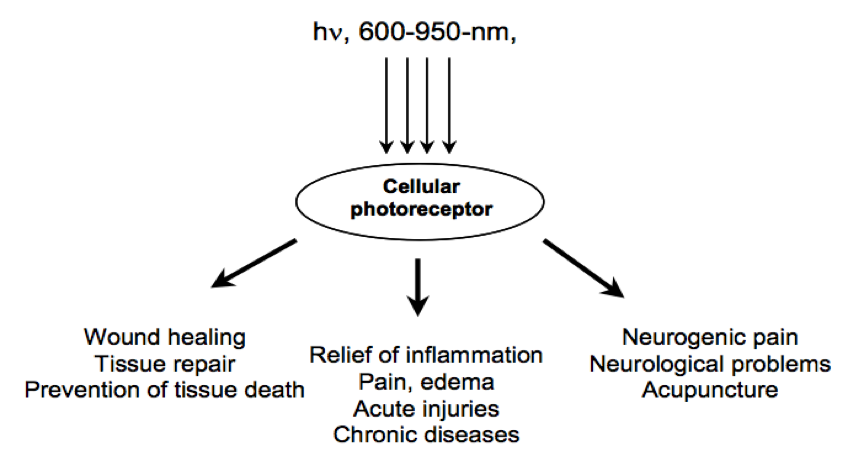 Russian researcher Prof. Tiina Karu identified cytochrome c oxidase in the mitochondrial respiratory chain as a primary chromophore for photobiomodulation, and suggested that the activation of a retrograde-type cellular signaling pathway could explain how a single relatively brief exposure to light can have effects that last for hours, days or even weeks. Any source of light, whether laser, LED, or even filtered white light, has the potential to be absorbed by e.g. cytochrome c oxidase and, therefore, to affect mitochondrial respiration and elicit downstream effects, if the wavelength, intensity and irradiation duration are appropriate.

A number of the effects of laser irradiation, however, are unique, and due to the speckle field that is created when coherent laser radiation is reflected, refracted and scattered. The speckle field is not simply a phenomenon created at and limited to the tissue surface, however, the depth within the tissue at which speckles can still be created from transdermal irradiation is a topic of some debate.

Laser speckles formed in the tissue create temperature and pressure gradients across cell membranes, increasing the rate of diffusion across those membranes. Further, photons within each speckle are highly polarized, leading to an increased probability of photon absorption (one possible reason for why laser therapy has been shown to consistently out-perform other non-coherent light sources, especially for deeper tissue treatments).

Author: SpectraVET; Peter Jenkins founded SpectraMedics in October 1996.  For the next three years, SpectraMedics focused on manufacturing The Winning Edge greyhound laser and the CompuLase medical acupuncture unit, while Peter devoured every scrap of information he could obtain to increase his knowledge and understanding of laser phototherapy and therapeutic lasers – which of course he continues to do today.