Signs and Treatment of a Dog Hip Problem

Signs and Treatment of a Dog Hip Problem

The investigation of a dog hip problem usually involves tests for a genetic condition called hip dysplasia (CHD), which is the abnormal functioning of the hips, and osteoarthritis. A veterinarian will do a physical examination which includes watching how your dog walks. Hip dysplasia in dogs is common in large breeds, but can be seen in smaller breeds such as Boxers. The condition is the result of laxity in the muscles and ligaments that hold the hip bone in place. Early detection, as early as 5 months, can reduce the severity of the disease in later life and prevent the onset of osteoarthritis as a secondary condition. Symptoms of dog hip problems include an odd or unusual gait, a reluctance to exercise and play, and difficulty getting up after sitting. Both hip dysplasia and osteoarthritis are progressive and get worse over time if left untreated. Treatment involves medications, surgery and possibly dietary supplements.

Dogs can have a number of hip problems, from arthritis to hip dysplasia (an abnormally-formed hip joint). Some breeds are more susceptible to hip problems than others, including:

As you can see, large dogs are more likely to have hip problems than small dogs, although problems are seen in smaller dogs and toy breeds.

Osteoarthritis is the most common type of arthritis found in dogs and is a leading cause of hip problems. It is progressive in that it gets worse over time and result in the loss of cartilage. Approximately 25% of older dogs suffer from some form of arthritis. 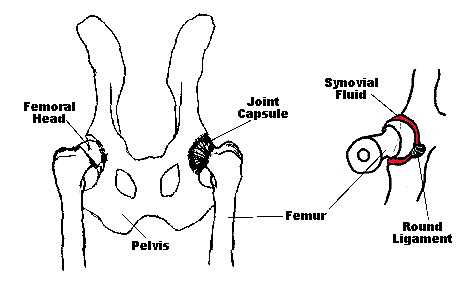 Muscles hold the bone against the hip/ The muscle holds the femoral head in place against the acetabulum, the cup that holds the bone. Hip problems occur when the complex coordination of this area is abnormal such as from muscles that no longer hold the bones in the correct position.

Symptoms of a dog hip problem include limping, particularly favoring the rear legs; reluctance to climb stairs or jump up on furniture; and behavioral changes, such as being less playful than usual.

It is important to note that some dogs do not show many signs of hip problems, especially some dogs with hip dysplasia. In the case of dysplasia an early sign might be an unusual gait or walk that almost resembles a "bunny hop". 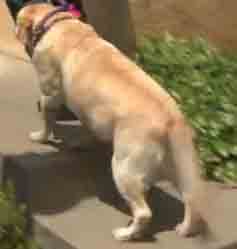 This Dog Uses Both Legs Together to Move Up Stairs, a Classic Sign of Canine Hip Dysplasia

To diagnosis a dog hip problem, your vet will do a physical examination and then take x-rays. Your dog will probably need to be anesthetized for the x-rays, because he will need to lie absolutely still and his hips will have to be positioned in just the right way.  CT scans can also be used.

The treatment of a dog hip problem depends in part on the cause.

Hip Dysplasia: There are medications and surgical options for hip dysplasia for dogs. The key to treatment is early detection, such as in puppies that are 5 months of age. Early detection and treatment can help to prevent conditions such as osteoarthritis, such as through surgical repositioning. New therapies serve as an alternative to surgery, such as prolotherapy which involves the injection of vitamin B12 and the use of lidocaine. In more severe cases surgery and hip replacement may be required. 85% to 95% of hip replacement surgeries are successful.

Arthritis: For arthritis, medication can be used to treat the condition. Non-steroidal anti-inflammatory drugs (NSAIDS) are prescribed for low to moderately painful conditions. They reduce inflammation of the hip joint and relieve pain. For more painful conditions, steroids such as prednisone may be prescribed. There is also significant interest in the scientific community in natural and nutraceutical (fortified foods) such as glucosamine. Good sources worth researching are ones which is specifically designed to to treat symptoms, relieve pain and reduce stiffness of arthritis, rheumatism and degenerative joint disease in dogs.

There are also non-medical things you can do to help your dog.

If your dog is overweight, he needs to go on a diet. Being overweight will put extra strain and stress on his hips and cause him additional pain. Talk to your vet about the optimal weight of your pet and how to help him lose weight.

Your dog needs to get some exercise everyday. Exercise that is low-impact, such as walking or slow jogging, swimming, and climbing stairs is all good. Fast running and jumping will be hard on his hips. Monitor your dog's pain level and keep the exercise to a level he can easily tolerate.

You can also massage your dog's hips. Start by petting the hip area. Then begin gently kneading the area with your fingers. Move in small circles at first, gradually widening the circles. If your dog withdraws or shows signs of pain, stop the massage. In many cases, though, massage can be very helpful at relieving pain.