Wouldn’t it be great if we could see where our dog’s pain is coming from? If we could see the functioning of the body instead of just the structure like we see in radiographs? With Canine digital thermal imaging, we can see exactly that.

The Canine Digital Thermal Imaging system that we have is an infrared camera with state of the art medical imaging software known as, Digatherm. The science is based on the theory that every object with a temperature greater than absolute zero emits electromagnetic energy either from itself or reflected back from other energy sources. This means that areas of inflammation in the body will be of a higher temperature than non-inflamed areas since a hallmark of inflammation is increased blood flow to the affected area. 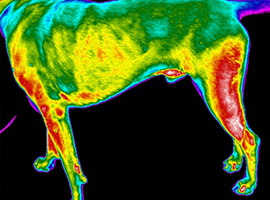 During an orthopedic exam we palpate the limbs. An inflamed area will palpate warmer than the same area on the opposite limb, but for that temperature change to be apparent to our hand, it needs to be more than 3 degrees, and the various types of coats can make a difference in how sensitive our hands can be. The Digatherm software is sensitive to a single degree. It picks up inflammation often before it becomes clinically obvious, i.e. before it results in lameness. Another scientific theory that supports the use of this equipment is that animals are thermally symmetrical – the same thermal image should be found on the right and the left sides of the body. 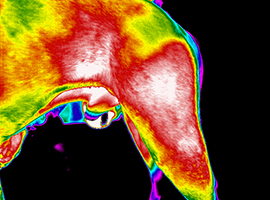 Lameness issues in dogs can be more difficult to isolate because they don’t allow nerve blocks like horses do. We often end up radiographing the entire limb looking for a bony defect. But there are more than bones that cause pain. Ligaments, tendons, muscles, nerves, all of these can be the source of lameness, and won’t be identified on x-ray. Thermal imaging evaluates the entire dog in a series of images looking for an asymmetrical thermal change. Let’s say we have a dog with a partial cruciate ligament rupture. The dog will have been very lame for several weeks and gradually may have gained some improvement. The dog then comes in for evaluation because the lameness (though somewhat improved) is still apparent. Your veterinarian might identify laxity in the stifle joint and send your dog to rehab, or surgery followed by rehab. 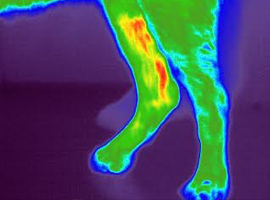 When they come to us, our thermal imaging will show a thermal increase in the damaged stifle, but it will show even greater increase in the opposite limb because this limb has been carrying the extra weight that the dog has shifted away from the acutely painful limb, maybe even for weeks. If we only direct therapy to the operated limb, we leave a large area of pain and inflammation ignored.

Older dogs that come to us for arthritis management are scanned with the Canine Digital Thermal Imaging system to show us the specific joints that need targeted therapy. Several sessions of therapy later we rescan the animal to be sure we are gaining the improvement we expect. 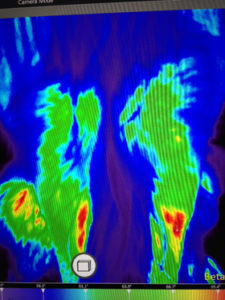 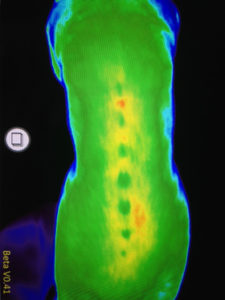 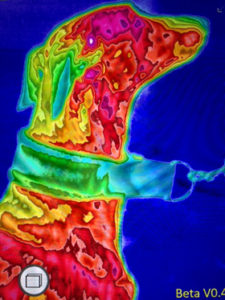 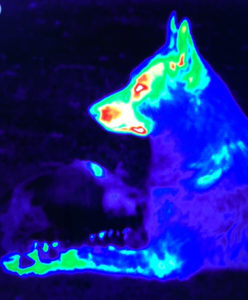 We have scanned many dogs at competitions and identified areas of injury that needed closer evaluation and treatment. Many dogs have sore backs that go unnoticed until thermal imaging. Dogs bred to work can be so focused on their job/sport that they ignore pain. We need to be proactive with working and sports dogs to be sure there are no health issues that we need to evaluate.

*Need help with your pet?  Access our expert Teleconsultants here - from Vital Vet to your home.